DO I NEED TO BRING ANYTHING ON MY FIRST DRIVING LESSON?

Yes you will need to bring both parts of your driving licence. You will need to read a car number plate from a distance of 20.5 metres if you need glasses to do that please bring them with you otherwise the lesson cannot be conducted.

WHAT WILL WE DO ON OUR FIRST DRIVING LESSON?

On your first lesson your instructor will be taking you to a quiet location showing and explaining to you the controls of the car and how they work. All this will be done before you do main road driving.

HOW LONG WOULD IT TAKE FOR ME TO BE READY FOR MY PRACTICAL TEST?

The DSA advises students take a minimum of 45 hours worth of professional tuition combined with at least 22 hours of private practice. We understand that this is different for each student and will depend on the frequency of driving lessons and ability to learn. We will endeavour to get you up to practical driving test standard in the shortest time possible.

WHAT IS THEORY TEST AND HOW DOES IT WORK?

The theory test is made up of two parts; the multiple choice part and the hazard perception part. You need to pass both parts to pass the theory test. Once you have passed the theory test you can then apply to take your practical driving test. The multiple choice part is delivered using a touch screen computer and the hazard perception part records your responses through the use of a computer mouse button. If you pass one part and fail the other you’ll fail the whole test, and you’ll need to take both parts again. The questions in each multiple choice test vary according to the category of vehicle you’re hoping to obtain a licence for ie a motorcycle theory test will contain specific questions that don’t appear in any other test. For the hazard perception test there are no separate versions for different vehicles, each vehicle category takes the same test, however the pass mark is different for different categories of tests.

Part one – Multiple Choice
Before the test starts you’ll be given instructions on how the test works. You can also choose to go through a practice session of the multiple choice questions to get used to the layout of the test. At the end of the practice session the real test will begin. A question and several answer options will appear onscreen and you have to select the correct answer to the question by touching the screen. Some questions may require more than one answer. For cars and motorcycles you’ll be asked 50 questions in 57 minutes and the pass mark is 43 out of 50. From 28 September 2009 some car and motorcycle multiple choice questions will be given as a case study. The case study will show a scenario that five questions will be based on. The subject of the scenario focuses on real life examples and experiences that drivers could come across when driving. You can navigate between questions and ‘flag’ questions that you want to come back to later in the test. After the multiple choice part you can choose to have a break of up to three minutes before the hazard perception part starts.

HOW LONG DOES THE PRACTICAL TEST LAST?

The practical driving test lasts approximately 35-40 minutes and will entail driving on different types of roads with various road conditions. Within the test you will be asked to perform 1 reversing manoeuvres and potentially an emergency stop exercise. Your driving instructor will ensure that you are well prepared for all aspects of the practical driving test giving you the best chance possible of passing.

Upon passing your test you will be offered the opportunity to take a short course for Pass Plus. This is a training course specifically aimed at new drivers, designed by the Driving Standards Agency (DSA) with the help of insurers and the driving instruction industry. Pass Plus will build upon your existing skills and knowledge, it will teach you how to anticipate, plan for and deal with all kinds of hazards, and can help you to become more confident on the road. The benefits to you, apart from the safety aspects are further discounts on your vehicle insurance. Ask your instructor for information if this is something you would like to know more about. 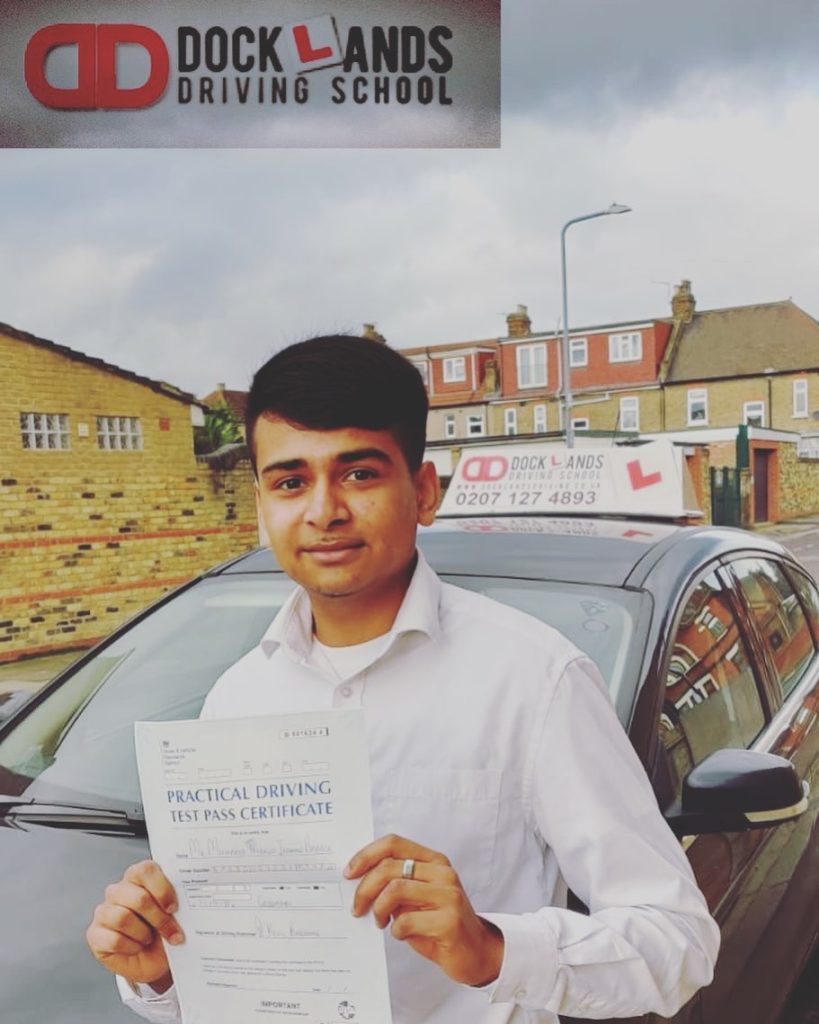 Call Now To Book Your Driving Lessons in East London

Pass your driving test first time with us

Don’t wait any longer – get on the phone or book your first lesson online with Docklands Driving School right away!